Picture a rural area. Arid landscape and bare trees. The smoldering heat slowly frying you. Small patches of dry grasses are in fields here and there. Houses colored in the color of mud. A small girl tending a goat at the fields, instead of attending school. Her eyes sparkle like the water she carries to her goat. She craves to go to school but she can’t because she has too many chores to attend to. All over the world, especially across the Indian subcontinent, girls’ right to education is being denied and snatched away right in front of our eyes. Some argue that there are too many barriers, especially in certain countries and places. Girls deserve the right to education because we are all equal as human beings, many risk their lives just to learn, and that the economy would be growing as women would get to contribute to society.In many developing countries, girls are finding it hard to get an education. Education in many cultures around the world - like Mexico - girls just can’t get an education and women’s equality is far from reality. Julia Miranda, secretary for the Compassion center in the community of Donato Guerra states that “Mothers accept the custom of telling their girls that they will not go to school or receive an education because they will only marry and have their own children” (“Five Reasons Girls Don’t Need An Education”). But, with the help and guidance from Compassion and its committed church members, some girls are able to reach their goals. This matters because it gives the girls more spirit to keep going on. When people like Julia pitch in, it really does show how supporting a beneficial cause can go a long ways.

Some try to reinforce the idea that girls don’t need an education because they are seen as “house wives” and the “caretakers” of the home. Then it would become a waste of money and time. It would also reduce the amount of time for girls to work and help / support the family. Some also may think that we are not physically meant for work and that women are “weaker” than men. While some of these points may be true, the reasoning behind it is not accurate. You can’t justify it. We are not meant to clean up after people - no one is. We are not laborers, we are just human. It isn’t fair to just decide someone’s fate based on their gender. It’s erroneous in every way. Men and women alike, we all deserve education. We all deserve our fundamental rights as human beings.

Recently, Michelle Obama visited Africa and went to a girl’s leadership camp. She told them, “I am here to shine a big bright light on you” (“Michelle Obama Stresses Girls’ Education in Visit to Liberia”). Not only did she encourage them, but Michelle Obama and Barack Obama introduced an initiative called ‘Let Girls Learn’. Let Girls Learn is a program which assuredly ensures that girls get an education. They gain the skills, knowledge, and confidence to break the cycle of poverty and help strengthen their societies. It also emphasizes the importance of education. Not only did the Obama family give us hope and motivation but the United States Agency for International Development announced up to $27 million in funding. This is very important because it significantly shows that people out there are tying to stop this outcome of girls not having an education. It shows the love they are receiving and the help that is given.

Nevertheless, according to credible sources from New York Times, a 41-year-old teacher was gunned down 200 meters from her all-girls school near the Pakistan-Afghan border. Two classrooms in an all-girls school in the north of Pakistan were blown up, and at an awards ceremony in the heart of Karachi, a principal was shot to death. Another teacher and four pupils were wounded after grenades were hurled into a school that specialized in enrolling girls. The teachers from Karachi were visited by Malala a few months ago, which obviously shows the pure hate from so many others. This really matters because poor innocent lives are just being taken away. Why? To learn! Is it wrong to aspire in life? Is it wrong to want to learn? But most importantly, it it wrong to take someone’s opportunity away from them just because of their gender?

People that don’t support girl’s education don’t realize that increasing women and girls’ education contributes to higher economic growth. Research, statistics and evidence shows that increased educational attainment accounts for about 50% of the economic growth in OECD (Organisation for Economic Co-operation and Development ; stimulates world trade) countries over the past 50 years, of which over half is due to girls having had access to higher levels of education and achieving greater equality in the number of years spent in education between men and women. Men and women will be giving to the community and helping the economy. If there was only Men working and women cleaning up after everyone else, the economy would not have prominent or effective growth. It’s a win win to both sides. Women would get the education they need and would be able to give to the economy.

All of this sums up to one conclusion. Girls’ education is very important because it’s a basic right and the economy would benefit from it. This is very important because so many girls and women alike are struggling to learn and are fighting for their rights. We have two decisions. Either we can ignore it or we can stand up to this problem. We can spread the word about how girls all over the world are determined to get an education. We can contribute to these organizations and help with funding. All of us can help support them and show how one small act of gratitude can change someone's life.

If you want to read more about this issue - click on the link!: Girl's who risk their lives for education.

Here's another article about this issue - click on the link!: Opinions on educating Girls.

Thank you for reading! Spread awareness by sharing this website! 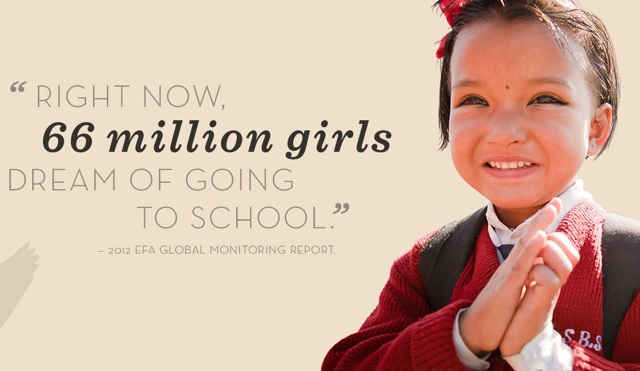 Here's my sources for all the information about girl's education above:

Thanks for checking out my website - spread awarenes and rock on!